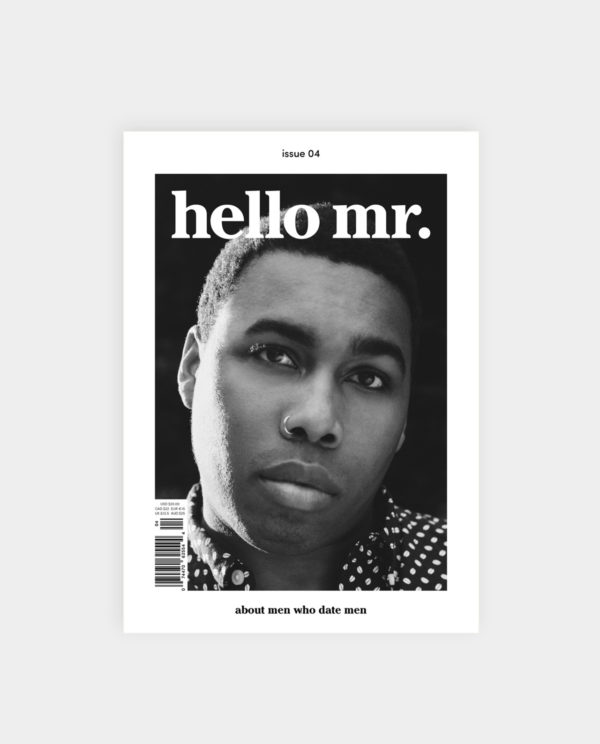 About men who date men.

HELLO MR. are excited to announce the fourth issue and introduce you the new cover mister, Saeed Jones, photographed by Michael George.

Saeed’s new book of poetry, Prelude to Bruise, investigates race, sexuality, and his escape from the South. Only after he left for the metropolitan solace of New York City, where he is the LGBT editor at Buzzfeed, did he abruptly realize that digging up his past was his best way forward.

Embracing our histories became a recurring theme in this issue. We reflect on the effects of the classroom through the eyes of two gay educators, one new, the other recently retired. We witness a young man meeting his estranged uncle, musician John Grant, who was disassociated from their family almost 20 years ago and how that experience motivated him to pursue his dream, which now includes collaborations with Sinead O’Connor, Hercules & Love Affair, and music in the acclaimed film Weekend. Similarly, London-based fashion designer Bobby Abley, fled his hometown to explore his passion. Ironically, drawing from childhood classics like The Little Mermaid, his Disney-inspired collections have now become a staple to his identity.

Now matter what our relationship with the past, it is the foundation for who we are. In many ways, this fourth issue marks a return to our roots. In less than two years, Hello Mr. has expanded and evolved in many incredible ways. Through it all, we are constantly considering the mission we set forth to achieve and ultimately how our growth is serving you. It still feels like we’re just beginning, and seeing another issue added to the collections on your coffee tables and nightstands is motivation to continue building and moving forward.